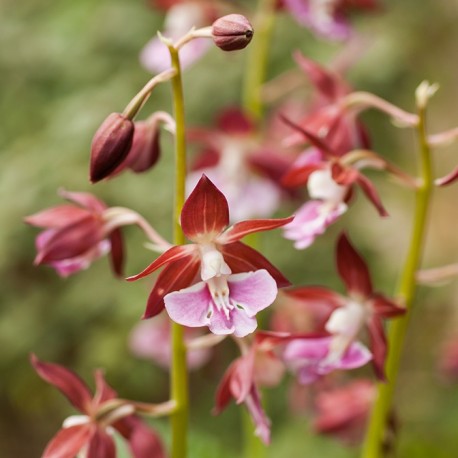 This hybrid between Calanthe discolor and Calanthe izu-insularis is now available from Phytesia. In spring, the flowers give off a wonderful scent of clove. The color of the flower is variable and includes combinations of white and red, yellow and red, pink and red, etc ... each plant is different.

The Calanthe genus contains about 200 species, mainly in the Far East. This is a very popular orchid family in Japan, where they are considered sacred flowers. The variety of colours seems infinite. Some species and cultivars have a very pleasant scent. As the flowering period is the longest of all perennial orchids, this plant is also an excellent choice for growing in a pot on a terrace. In this case, be sure to select a large enough pot (minimum diameter 30-40 cm) so as not to hinder the development of new shoots that will appear on the periphery the following year.

Plant the Calanthe orchids in a protected spot, in clear and humid undergrowth, or even near water points, close to Cypripedium, arisaemas, ferns or hostas.

The soil should never dry up in summer, and it should never be waterlogged in winter. Make sure to water regularly between April and September.

Terrestrial Calanthe Orchids are quite greedy plants during the growing season: a regular supply of geranium-type fertilizer at 1/2 dose from mid-May to mid-September will be very beneficial.

Calanthe Orchids can withstand a minimum temperature of -10°C to -15°C. It is advisable, at least in regions with severe winters, to protect them during long periods of freezing (temperatures below -15°C for a long period).

Plant them in the semi-shade, at the edge of large trees.

5 other products in the same category: