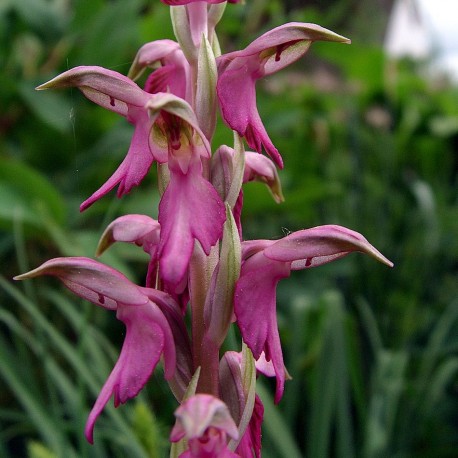 The orchis (Anacamptis) sancta is a Mediterranean species that is usually found on calcareous soils in full sun.

Its distribution is largely based on the eastern Mediterranean, occurring somewhat sporadically in the Aegean islands, Cyprus, Anatolia and the Near East. Although it can be numerically abundant in its preferred locations, it is decidedly local.

The bulbs of this plant are widely used in Turkey for the production of Salep, a popular local drink.

It is a species that goes dormant in the summer and begins to develop in the autumn; no vegetation is usually visible during the summer.

This mainly European genus contains species of very varied shapes and colours. From their rosette of leaves emanates a dense spike of spectacular, delicately cut flowers.

In contrast to other terrestrial orchids, Orchids have a summer dormancy; no vegetation is visible during the summer.

This type of plant is more suited to a connoisseur audience.

In cultivation, it is advisable to use lava stone (pumice) or fine quartz to keep the soil light and well drained. We recommend adding a small amount of compost low in organic matter or clay (maximum 5%).

The ideal location will be sunny or semi-shaded.

Unlike most other terrestrial orchids, Orchids are characterized by a summer dormancy; new leaves appear in late autumn or winter and persist until the flowers bloom in spring and disappear as soon as flowering is over. No vegetation is usually visible during the summer.

3 other products in the same category: