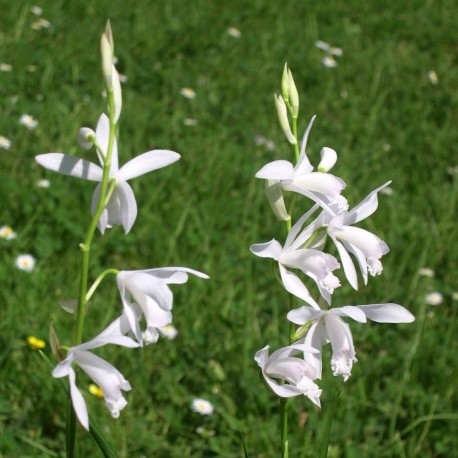 Pack of 2 X 1 Liter pot of Bletilla striata 'alba': By purchasing this Duo-pack, you received the second plant for only 5,00 euro...

The Bletilla striata ‘alba’ will flourish into a White flower from June to July up to 60-80 cm.

By buying this product you can collect up to 1 loyalty point. Your cart will total 1 point that can be converted into a voucher of 0,20 €.

In the garden, a humus-rich, light, aired and well-drained soil is recommended. You can air your soil using compost for hardy perennials. For an optimal result, add 20% of lava stone (vulca, pumice, pouzzolane, perlite…) in order to maintain good moistness in summer and to ensure good drainage during the winter. Indeed, more than intense frost, it is excess water in winter that proves to be the pseudobulbs’ worst enemy.

Bletilla are fairly rustic orchids, so they should be protected by mulch in winter in the regions where the temperature regularly descends below -20°C.

In the garden, the ideal site will be sunny or semi-shaded. It is important not to allow the substrate to dry in summer.

During the winter, the plant persists in pseudobulb form.

The new Bletilla shoots appear during April or May and open out into a bouquet of leaves in the spring. The flowering is at its best at the beginning of the summer (June, July). Following the flowering, the foliage, fairly persistent, remains green at least until October before fading and disappearing completely. Bletilla then go into their winter dormancy.

Over the years and following the successive growth and dormancy cycles, Bletilla not only become stronger but also multiply, thanks to the annual appearance of new shoots

12 other products in the same category: